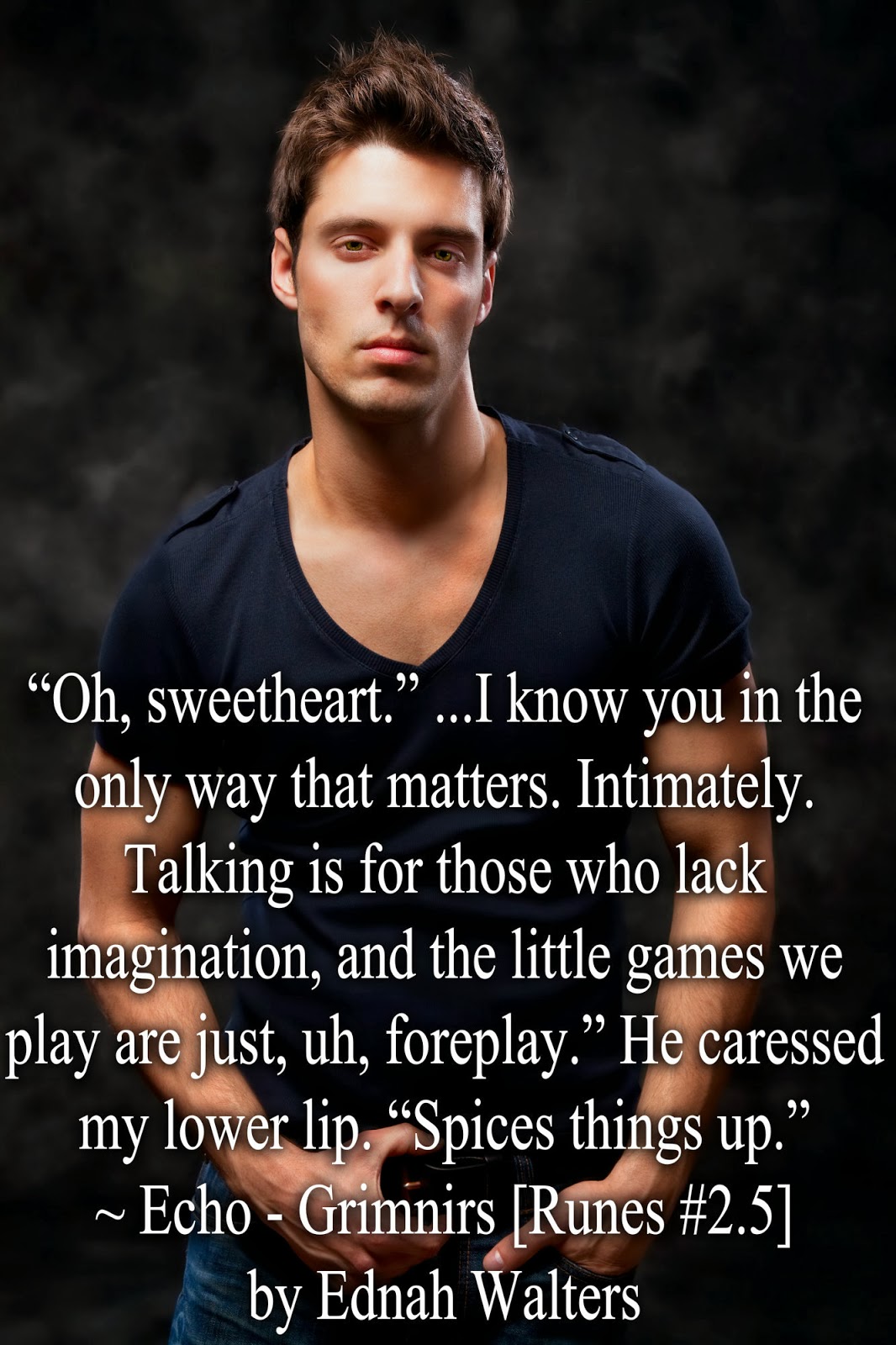 What did he expect? That I should laugh in the face of death? “I don’t want to… to…” I couldn’t bring myself to say “die”.

He shifted, so he was kneeling, though he still straddled me. “Why didn’t you just say so? I would have stopped.”

I blinked. My voice shook as I mumbled, “You would?”

“Of course.” He shoved the knife somewhere behind him. “What’s the fun in foreplay when you’re not enjoying it?”

Enjoying it? What kind of a sick bastard toyed with people before killing them? Trying not to lose it, I narrowed my eyes at him. “Do you mean I have to show you that I’m scared before you kill me?”

He looked at me like I was the village idiot. “Kill you? What are you talking about?”

“Just now. You were about to kill me and take my soul.”

He laughed and gracefully got off the bed. “Nice comic relief, sweet-cheeks.” He bent and came up with his T-shirt.

“I’m a Grimnir, not a killer. There are rules and there are rules. I might break and bend a few, but I don’t cross some lines. I don’t kill my people. Where have you been the last week?”

Now I was the one confused. His people? “Last week?”

“You were supposed to meet me, but you just disappeared. What happened?” He pulled on his shirt, tugging it over his broad chest, his movement graceful. The sleeves hugged his hard chest and masculine arms. By the time he covered his ridged abs, I was sitting up and trying, unsuccessfully I might add, not to drool while pulling my button-less shirt across my chest.

“Meet you?” I asked. My thought process had slowed to a snail’s pace. “I’ve never seen you before until today at the store. I think, uh, you are confusing me with someone else.”

“Oh, sweetheart.” He reached out and twirled a lock of my hair around his forefinger. “I’d never confuse you with anyone else. I know you in the only way that matters. Intimately. Talking is for those who lack imagination, and the little games we play are just, uh, foreplay.” He caressed my lower lip. “Spices things up.”

“Cut that out.” I swatted his hand, heat rushing to my cheeks. Needing space, I scooted to the other side of the bed. “You are mistaken. I’ve never…”

I couldn’t just blurt out I was a virgin. That I’d been waiting for Eirik, the guy I loved, to one day wake up and notice me.

“Never mind. So what you’re saying is that the entire time I thought you were about to kill me, you were playing a game?”

“Foreplay, doll-face.” He wiggled his brow. “That’s how you like it.”

“Are you nuts? You scared the crap out of me, and over what? An imagined relationship between us?”

“Imagined?” He appeared beside me in a flash. I took a step back, but he followed. His earthy scent and warmth swirled around my senses, screwing with my thoughts. “Would you like a blow-by-blow description of what you and I have been doing the past several weeks? How much you like it? How often you—”