Purr like a kitten for Echo in 3 Days! #Grimnirs #RunesSeries 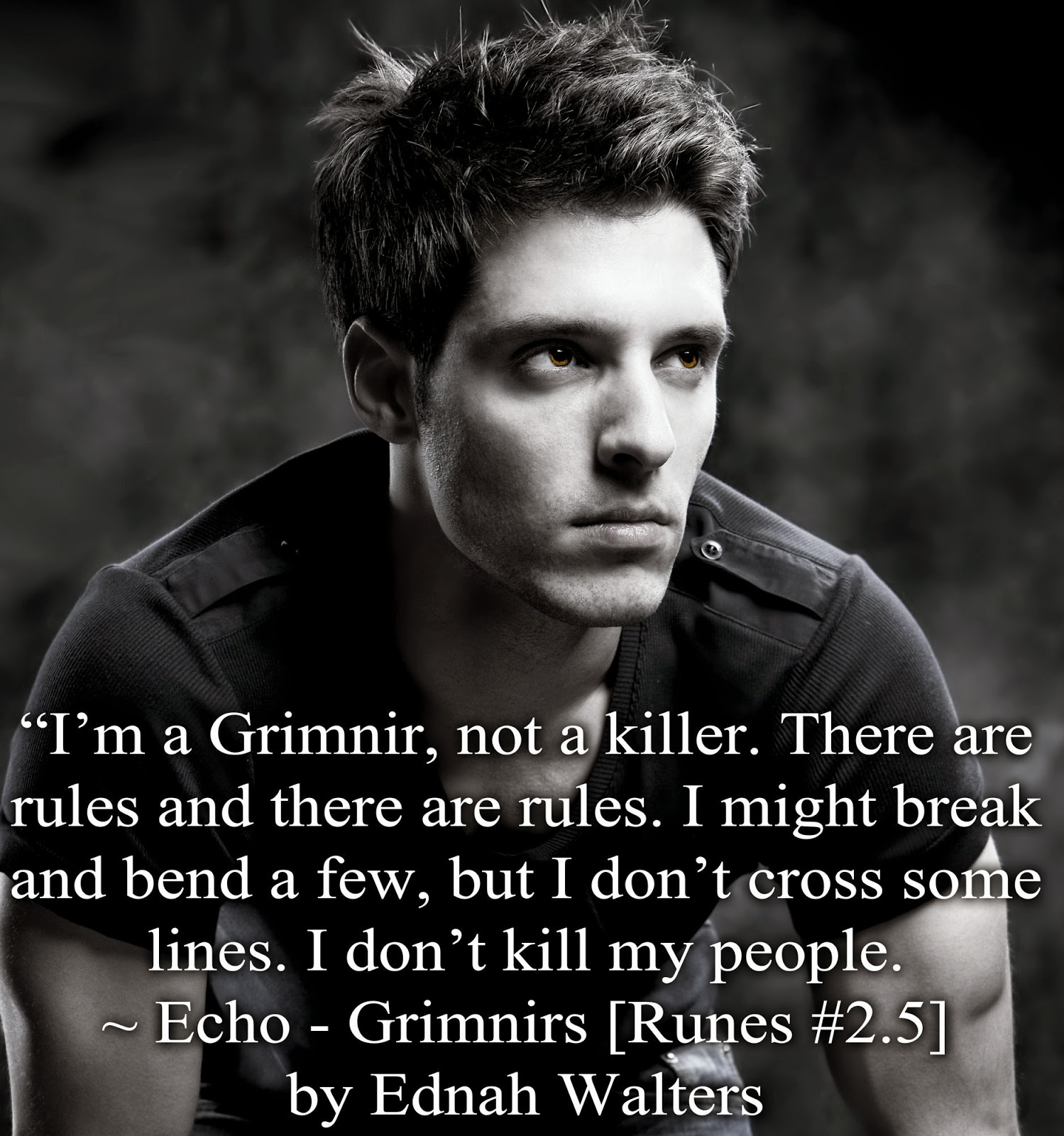 “No,” I snapped, my cheeks burning. “Stop it! I don’t want to be part of your twisted game, reaper. What? You’re bored escorting souls, so you have to find people to screw with?”

His eyes narrowed. “Are you serious?”

I wanted to claw his eyes out. Right at that instant, I didn’t care that they were gorgeous or that he had the most incredible lashes I’d ever seen on a man. I wanted to neuter him.

“Then tell me how I know personal things about you, Cora Jemison,” he said, leaning in. “Born on December sixteenth in Portland, natural blonde, curtains and carpet.” He grinned when heat rushed to my face. “You wear bra size 30 D, hate spinach, but love Hawaiian pizza. Your best friend is Raine Cooper, and until I came along,” he paused and smirked, “you thought you had a crush on Eirik Seville. The god-child didn’t deserve you.”

“No, you don’t. I could tell you a thing or two about him that would make you run—”

“Not interested. He’s perfect. And Raine is no longer my BFF.” Gripping my ripped shirt, I moved as far away from him as I possibly could. “You could have gotten that information from my friends or my vlog.”

His arched eyebrows shot up. “Okay, let’s move on to intimate details. You love it when I kiss your neck. Makes you purr like a kitten. You have two distinct birthmarks: one on the underside of your left breast and the other on your inner thigh, where only a lover would know. You want to cover both with tattoos but you’re scared of the tat guy getting too close.”

How could he possibly know such things? Covering my birthmarks was something I’d never discussed with anyone, not even Raine. No, that wasn’t true. The topic of body mutilation had come up during a group session with Dr. Wendell at the psych ward, and I’d mentioned wanting to ink myself.

“GAH! You are a sick, perverted jerk! You had your souls spy on me. Now wonder I’d wake up and find them standing over my bed.”

“Listen, baby-doll. I love playing games with you because it makes sex great between us, but this is ridiculous.” He moved away and snatched his duster. “Stop pretending you don’t know me. If you want to end things, just say so. It’s obvious you’d rather be a Mortal than…” He looked ready to grab me and shake some sense into me. “Forget it.”

“Than what? Be with you, someone who’s obviously insane?” I pulled a hoodie off the peg on my wall and yanked it on. “What kind of a reaper goes around making up stories about people? Kissing them like… like…”

“Like you want to suck their soul, you jackass.” I snapped and tried to zip up the hoodie, but my hands were shaking too much. “You want my soul, take it, but don’t go around claiming we are lovers when I’ve never seen your smug, condescending face from wherever hellhole you crawled up from. If this is some kind of reaper joke because I dispersed a few souls, then hardy har har. The joke’s on me. Now get out of my room.”