WHAT WILL YOU WIN?

One lucky winner will get:

2. Add HUNTED on Goodreads for an extra entry

3. Join my Fanpage on FB for the last extra entry


1. Winner of Random Act of Kindness Giveaway is Jeanette Platt. I sent you an e-mail so get in touch

2. Runes, book #1 in my new series, is with several editors. No rejection is good, right? We'll see.

3. Immortals (Runes book #2) is halfway done. I'm still hoping to get done in a couple of weeks. Why has it taken so long? The internal editor living in my head keeps creeping out and messing with my fast draft. This is where I'm at:

4. Tour of Hunted (Guardian Legacy series) is coming up in a couple of months, so I'll be taking a break from writing to write guest posts for the tour...sigh/yeah!!! I have a love/hate relationship with tours. 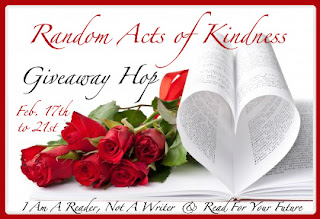 This hop goes from Feb17th -Feb 21st
As usual, thanks to Kathy and Reviews by  Read For Y our Future for hosting it
﻿


WIN a signed ARC of HUNTED 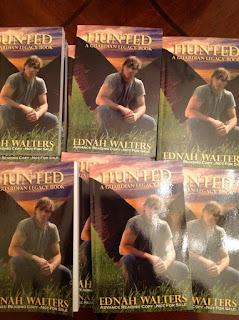 2. Add HUNTED on Goodreads for an extra entry

3. Join my Fanpage on FB for the last extra entry

MEET SYKES:
Teen Guardian with the ability to manipulate fire, energy and women...his words, not mine
(This interview first appeared on Katrina Whittaker's Page Flipperz YA 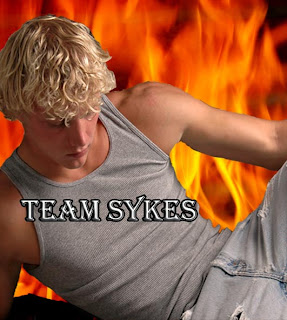 Katrina walks into the room to find Sykes sprawled on her chair, feet up on her desk and eyes closed. Dressed in relaxed jeans and a gray T-shirt Katrina had seen on a teen model on the cover of a trendy magazine, he looks like a fallen angel.
Not sure whether to wake him or not, Katrina stares, wishing she were a teenager again and he was her…
Sykes (eyelids lift to reveal sparkling amber eyes): Don’t stop now. You were getting to the interesting part. I were your…?
Katrina (blushes and fakes outrage): You are reading my thoughts?
Sykes (feet leaves her desk then he stands up…six-foot-two of pure muscles, eyes still twinkling): Of course. It’s the best way to pass time. Wouldn’t you do it if you had a chance?
Katrina (laughs): You’re impossible.
Sykes (walks to where she stands and gives her a hug): That’s my middle name, Katrina. Besides, I feel like I can be myself with you. Ednah thinks you rock.
Katrina (closes her eyes and inhales…ooh, he smells so good): She does?
Sykes (steps away from her and sits on her desk): Of course. You help her tell the world about our exploits. Anyone who sticks it to the High Council and their outdated rule about keeping our existence a secret is a friend in my book.
Katrina (chuckles and walks around to sit on her chair): Oh, okay. Then let’s break more rules.
Sykes (rubs his hands): Great! How about you and I run away together.
Katrina (tries to give him a stern look but fails miserably): I think your friends might miss you. After all, you are a powerful Guardian.
Sykes (cocks his brow):  Who cares about being a Guardian when we can be with someone you love.
Katrina (blows out air): Okay, enough with the flirting. Let’s get down to business.
Sykes (eyes narrows): Have you been talking to Lil?
Katrina: No. Why?
Sykes: She uses that same tone when she wants me to do something. (sighs dramatically then gets off the table and takes the chair across from Katrina). Okay, I’m all yours. No, I could have been if you were adventurous, but since you choose to be difficult, we’ll do things your way. Ask me anything.


Katrina: First, would you like something to drink…tea, soda, coffee. Name your poison.
Sykes (gives her a slow smile): Pretty women, so I’m good.
Katrina (blushes again): You know we won’t get this interview done if you keep flirting with me. Lil won’t like it if we don’t do this.
Sykes (gives her a censoring look): Okay. Fine. I’ll behave.
Katrina: She’s your Achilles’ heel, isn’t she?
Sykes (shakes his head): No comment. Next question.
Katrina (picks up a paper from her desk and glances at it):  How does it feel to be a Guardian?
Sykes: Great! Train till you drop, live for hundreds of years, no worries about money and kick demons’ asses…I can’t imagine doing anything better. No, I can, but I need a willing woman.
Katrina (shakes her head):  What’s the coolest thing about your powers?
Sykes (raises his right hand and a blue energy ball the size of a soccer ball materializes. He grins at Katrina):  What do you think?
Katrina: I think you’re amazing.
Sykes (smirks): I can make it bigger if you like. Bigger is better, right?
Katrina (giggles): No, that’s fine. Let’s talk about Lil. She has all the abilities of a great guardian, and her powers are stronger than all of you guys’ combined. Does this bother you at all? (Raise her eyebrows) Maybe even scare you a little?
Sykes (grins): No, I think powerful women are hot, so she doesn’t scare me. Also, Lil is very caring and would never hurt anyone,  not deliberately.
Katrina: What do you think about the demons loyal to her? Are you worried?
Sykes (shakes his head): I’m not because if they step out of line, she’ll blast them straight to Tartarus. You have to see her battle to realize she takes no crap from demons.
Katrina: We know you like her. A lot. Can you tell us more about your feelings for her?
Sykes (grins): Who wouldn’t be attracted to Lil? She’s awesome, gorgeous and powerful.  Even Remy would have gone after her, but I told him she was mine the moment we met. I didn’t know about Bran at the time. (The smile disappears from his face, eyes become dull). He doesn’t deserve her.
Katrina (sighs): What would you tell her if you had a chance?
Sykes (stares at the ceiling then at Katrina, his expression serious): I’d never make her shed a single tear or give her a reason to worry. (shudders). Enough with morbid topics. Ask me something fun.
Katrina: Why do you like to piss off Bran when you can just ignore him?
Sykes (smirks): Because it’s fun. I like to remind him I will be there for Lil when she kicks him out.
Katrina: Do you think that will ever happen?
Sykes:  Oh yeah. I have a whole team of people rooting for me. Are you on my team?
Katrina: Of course.  What do you think about your group of guardians?
Sykes: The best team ever. Remy may be anal but he’s a great strategist. I’m not his number one fan, but Bran is more experienced than us and is great during a battle. Izzy and Kim are awesome too, and hot.
Katrina: Would you date either of them?
Sykes: Hell no.
Katrina (laughing): Why not?
Sykes (shudders): They have too much attitude, mouthy.
Katrina: Your favorite pastimes?
Sykes: Fight demons…video games…hooking up. Not necessarily in that order.


Katrina: Favorite video game?
Sykes: Halo, Call of Duty
Katrina: Favorite Food?
Sykes: Pasta.
Katrina: Favorite TV series?
Sykes: Don’t have time, but I catch Supernatural now and then. Funny series. They have a few facts straight.
Katrina: Music
Sykes (sticks out a leg and pretends to play a guitar while nodding his head): Zeppelin, Aerosmith, Ac/dc…classic rock all the way.
Katrina: How long do you think the feud between demons and Guardians will last?
Sykes: Eternity, unless the powers-that-be decides enough is enough. I don’t mind. I’d rather go out smoking a demon or… (winks)… hooking up with a beautiful woman. Then there’s always the chance that Lil will come through and fulfill her destiny.
Katrina(laughing and gets up): I hope so, because we’re stuck right in the middle of your war. Thank you for this wonderful interview. We should do it again.
Sykes (jumps to his feet): Yes, let’s. (Walks to her side and gives her another hug) Remember, I’m available if you ever decide to be adventurous.
Katrina grins, as he steps away from her. He salutes then teleports.