Every time we authors start a series, we hope it is the one that will click with readers and change the trajectory of our career. I've been writing for years and honing my craft, so thank you for embracing this new series and let's make it memorable.

For those who embraced Torin St. James and nominate him to YA Crush Tourney less than a month after the release of Runes, thank you. We'll make 2014, the year of Torin St. James. For now, get ready for the next instalment in the series.

Nothing can stop Raine Cooper when she wants something…
Raine finally knows that her gorgeous neighbor, Torin St. James, is a legend straight out of Norse mythology, and that her feelings for him are strong. Torin is crazy about Raine too, breaking the one rule he lives by: Never fall for a mortal. The problem is he no longer remembers her, his memories erased by Norns—Norse destiny deities—to punish her for defying them.

So Raine comes up with a plan...
She will make Torin forget his one rule a second time and fall in love with her all over again.
But she quickly learns that well-laid plans do not work when dealing with deities and supernatural beings. Desperate, Raine makes choices that could not only tear her and Torin further apart, but lead to the destruction of everything and everyone she loves.


EDNAH WALTERS grew up reading Nancy Drew and the Hardy Boys and dreaming of one day writing her own stories. She is a stay-at-home mother of five humans and two American short-hair cats (one of which has ADHD) and a husband. When she is not writing, she’s at the gym doing Zumba or doing things with her family, reading, traveling or online chatting with fans.

Ednah is the author of The Guardian Legacy series, a YA fantasy series about children of the fallen angels, who fight demons and protect mankind. AWAKENED, the prequel was released by Pill Hill Press in September 2010 with rave reviews. BETRAYED, book one in the series was released by her new publisher Spencer Hill Press in June 2012 and HUNTED, the third installment, was released April 2013. She’s working on the next book in the series, FORGOTTEN. Visit her at www.ednahwalters.com

Ednah also writes YA paranormal romance. RUNES is the first book in her new series. IMMORTALS is book 2. She is presently working on book 3, GRIMNIRS (Release date TBA). Read more about this series and the world she's created here www.runestheseries.com

Using the pseudonym E. B. Walters, Ednah writes contemporary romance. SLOW BURN, the first contemporary romance with suspense, was released in April 2011. It is the first book in the Fitzgerald family series. Since then she has published four more books in this series. She's presently working on book six. You can visit her online at or www.ebwalters.com.
Posted by Unknown at 7:21 AM No comments: 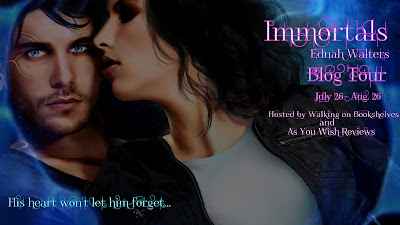 We have an amazing tour lined up, thanks to two wonderful ladies, Julia Hendrix of As you Wish Tours and Jeannette Whitus of Walking on Bookshelves
What do they have planned for you?
1. Two winners will get $50 gift card and copies of Runes and Immortals

2. You get to know what Torin thought and felt between that last kiss in Runes
and the beginning of Immortals?

5. Read text messages between Raine and Torin (she finally convinced him to buy one, what a girl)

6. Torin has a secret to share with you ( maybe a hint about the next book, who knows)

7. If you missed the first meeting between Torin and Raine written in Torin's POV,
come and read it.
HERE ARE PARTICIPATING BLOGGERS 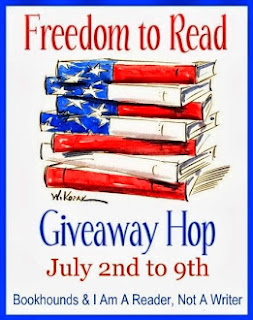 Thanks to Bookhounds and Kathy of I'm A Ready, Not a Writer for hosting this giveaway:

Since IMMORTALS, book 2 in the RUNES series, is being released in less than 5 weeks, you want to start reading this amazing new YA paranormal romance :  The hero, TORIN ST. JAMES, was nominated and participated in YA Crush Tourney 3 weeks after the book was released... that's how amazing he is. As for RAINE, you couldn't find a more gutsy heroine.

RUNES has nearly 70 reviews on Amazon and over hundred on Goodreads already. I want to hear from you, so add yours and join our discussions on YA Paranormal Romance with Mythology Fans on Goodreads.

To win a copy of IMMORTALS, head to Runes Blog run by some serious fan girls:

For now, one lucky winner will get an e-copy of Runes (so you can read it whenever) and a signed print copy and an Amazon gift card):

Scared, she sets out to find out what Torin is. But the closer she gets to the truth the more she uncovers something sinister about Torin. What Torin is goes back to an ancient mythology and Raine is somehow part of it. Not only are she and her friends in danger, she must choose a side, but the wrong choice will cost Raine her life.

I staggered backwards, needing to put space between us, so scared I could hardly think. Pain shot up my arm. I looked down, trying to find its source, and saw the knife protruding from my shoulder. It was a replica of the one Torin had pulled from his chest. Maliina must have thrown both knives at the same time. Weird, I hadn’t seen the knife sail toward me or felt the pain when it pierced my skin. I’d been focused on Torin.


Tears rushed to my eyes, and wooziness washed over me. I hated the sight of blood, even though only a blot of red discolored my light-blue top.


“Don’t,” Torin warned. He spoke with the authority of someone who was used to giving orders, and I found myself obeying and hating myself for being scared of him. What had Maliina meant by ‘he marked her’?


“I just want to help you,” Torin added softly.


“No. You’re crazy.” I shuffled away from him. I glanced at the others. Ingrid cradled Maliina in her arms while Andris etched runes on her arm. “You’re all crazy.”


Torin smiled. “Come on, Freckles. You know we’re not. We are… different. That’s all. Let me remove the knife, so the wound can heal.”